We’d like to share some insight into where home entertainment systems are heading, but first, we think it’s important to talk about how we got where we are today. The notion of having a 160 inch projection theater in your living room wasn’t really an option 30 years ago, but try to imagine what it was like for people 100 years ago.

Home entertainment in the 1920’s 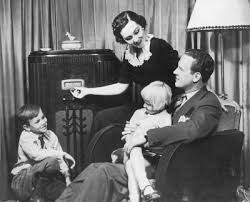 The nineteen twenties is widely regarded as the advent of modern radio broadcasting. There was a craze across the country to purchase radios, and soon radio became a medium for entertainers and advertisers to reach people in their homes on a mass scale. People loved having their homes filled with the sounds of music, sporting events, educational lectures, fictional stories, newscasts, weather broadcasts, economic updates and political commentary. Not a far cry from what people want today.

Advent of the Television

Although the topics were the same, the modes for communicating stories changed drastically. Fast forward to 1958. After 40 years of families gathering around their radio sets to listen, the television set has finally started to overshadow radio broadcasting. By the early 60’s most families had black and white television sets in their homes. Now people could see the actors, newscasters and musicians firsthand, which set us on the path to having a visual experience.

Interestingly, people didn’t care much about televisions until they had sound. A TV without sound still wasn’t as good as a radio.

Taking TV to the Next Level

It wasn’t until 1972 that the purchase of color televisions overtook that of black and white ones. Video tapes, home movies and video recorders started becoming common place in 70’s, overtaking the old slide projectors from the past. People started to experience the ability of being able to watch what they wanted when they wanted, a concept at the center point of nearly all home entertainment systems today.

Why Buy Home Entertainment When You Can Rent?

By the end of the 70’s right up until the turn of the century, video rental stores dominated the home entertainment market. Home entertainment systems starting taking things to the next level with video games, surround sound, music and video combo machines and eventually the DVD. Family night meant running the kids out to Blockbuster to rent a few movies and pick up a pizza. We finally reached what we thought was certainly the culmination of home entertainment.

Out of nowhere, this thing called the internet exploded and changed everything. Anyone with an internet connection and computing device could suddenly access just about anything they wanted, instantaneously. This is nothing short of the expectation. For the first time in since radio, an entire generation is consuming their entertainment somewhere other than a television, but for the rest of us, we’re still trying to get over the awesomeness of high definition television. Our favorite new debate: “Is this better than being at the actual game?” Better than the nosebleeds, that’s for sure! More comfortable too!

Me And My Home Entertainment System

So what does all of this mean? What does the modern home entertainment system look like? Well, it really depends on the family and their budget.

For a depraved Alabama fan with an empty nest, extra cash flow, and not enough time to squeeze in weekly flights to the game, a state of the art home theater might be the one solution that can bring the game to life. For those with young ones and a tighter budget, maybe a big screen with surround sound is enough to do the trick. For those that want to have their cake and eat it too, outdoor home entertainment systems are taking the market by storm. Future generations may not understand that “Go play outside” doesn’t mean watch a movie poolside!

The Golden Age of Home Entertainment

We’ve finally reached an age where home entertainment options are so vast that we’re only limited by our imagination. One thing is for sure though, we want our electronics to work and we don’t want to spend fifteen minutes figuring out how to turn everything on.